WRC-2010 (#four of 38) Introduction to Hinduism by Chander Khanna, Toronto 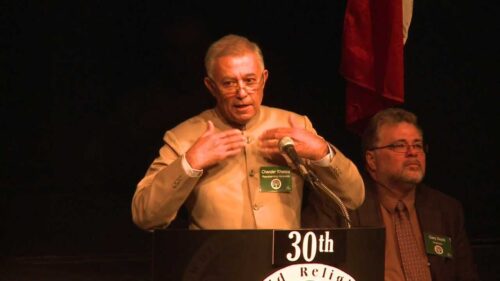 30th World Religions Convention: [Opening Session – October 16, 2010 – University of Waterloo, Ontario, Canada]- Introduction to Hinduism by Chander Khanna, Toronto. This convention is organized by the Ahmadiyya Muslim Jama`at Canada with the cooperation of a number of cities, tutorial establishment, religion based mostly associations, college students golf equipment and quite a few different organizations. The target of the occasion is to advertise mutual understanding and respect between the followers of varied faiths. Students of varied religions categorical the beauties of their respective faiths, in a peaceable and pleasant ambiance of affection and brotherhood. Religion teams current religious poems and songs. Chander Khanna is scholar on Hindusm and the VP of the Hindu Institute of Studying. Serves on the Religious Committee of the Associations of Himalayan Yoga Meditation Societies. Convener of the Sanskrit Vidya Parishad Lectures Founding member of the Toronto Native Societies Initiative beneath a Templeton Basis Grant. Contributing Editor of the Interfaith Unity Information. Given key-note addresses on Jap Philosophical traditions and has participated in worldwide symposiums in a number of international locations. [Conference Video Part #4 of 38 ] [www.worldreligionsconference.org]
source
camera phonefreeintroduction of hinduism religionsharinguploadvideovideo phone
0 2
Share